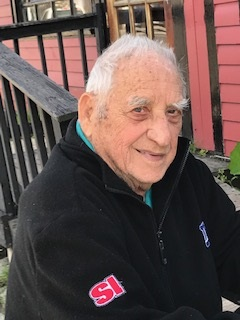 Visiting for family and friends will be on Thursday, November 8th from 3-7 pm at the Codey & Jones Funeral Home, 54 Roseland Avenue, Caldwell, NJ. A Funeral Mass will be celebrated Friday, November 9th at 10:00 am in St. Aloysius R.C. Church, 219 Bloomfield Avenue, Caldwell. The interment will follow at Gate of Heaven Cemetery in East Hanover, with Military Honors. To share a condolence or a memory, please visit www.codeyjonesfh.com.

Born in Orange, NJ, to Fred and Florence (Sellitto) Cardillo, Fred was one of five children raised in Orange and East Orange. Fred was a natural athlete who excelled in soccer and baseball. He played both sports in high school and baseball with the East Orange Soverals. He later played with the Pittsburgh Pirates Minor League Team in Virginia.

Mr. Cardillo proudly served in the US Navy during WWII, he was stationed in Kodiak, AK. as an Airfield Control Tower Operator.

After his Honorable Discharge from the Navy, Fred came home and worked for the East Orange Shade Tree Company. Following in his Dad's footsteps, he also worked part time, as a bartender at the Crystal Lake Casino in West Orange. Later he retired from the Gerber Products Co. where he was a regional salesman for many years.

Fred was a devout Catholic who loved and lived his Italian Heritage. A dedicated member of the Maria SS Della Lavina Society; the Old Guard; Past Grand Knight and Financial Secretary of the Caldwell Council #2561, and a distinguished 4th Degree Knight. In these roles, you might catch Fred carrying the statue of our Lady through the streets of Caldwell, shucking clams or grilling sausage and peppers for a community picnic or Italian festival, serving as Eucharistic minister, or raising money to support new seminarians.

A hunter and a gardener, with a love of the outdoors, he was an active member of the Hangtown Rod and Gun Club and the K of C Campers. As a gardener, he had a place in his heart for the fig tree. He sought the solitude of nature as much as the comradery of a camp fire. He even went as far as to chaperone his daughter’s high school camping trip with stories of a different nature! As a story teller with a memory for detail and dialogue, he entertained and  provided life lessons through the lens of his experience.  With a quirky sense of humor and a whistle that his nieces and nephews sought to emulate, children and animals (especially his cats) gravitated towards him.

In lieu of flowers, donations in Fred's memory to the Parkinson's Foundation or to the Evangelical School for the Deaf, 7111 Barrio Casa Blanca Road, Luquillo, PR 00773, would be deeply appreciated.

Share Your Memory of
Fred
Upload Your Memory View All Memories
Be the first to upload a memory!
Share A Memory