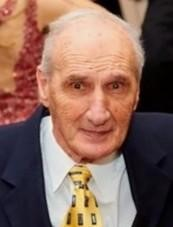 Lawrence "Larry" Freda, Jr. tragically passed away on April 24, 2020 from Covid-19. Born in Newark, New Jersey on May 6, 1934 to Lawrence and Giaconda (nee Iacobelli). He was married to his wife Victoria for over 62 years until her passing on the same day. He was predeceased by his son John two days previous, and siblings, John, Adeline, Antoinette, Theresa, Dominick and Fred. He is survived by sons, Lawrence, III and his wife Mary; Alexander and his wife Joanne; 6 grandsons, Matthew, Kevin, Alexander, Jr., Brian, David and Adam; and nieces, nephews, and cousins.

He served in the Army during peace time and was stationed in Europe. He worked at Pabst Blue Ribbon Brewery in Newark for 24 years. His final position was as a custodian at West Essex Regional High School.

Lrry will be best remembered as the devoted, loving husband to his wife Victoria. His greatest pleasure in life was taking care of and spending time with his beloved wife Vicki. Also known for his quick wit, biting sense of humor and his God given ability to make people feel safe and secure.

He was a full-time grandfather, enjoyed playing cards, attending sporting events, plays and choirs and anything that his family was a part of. He met his friends for coffee and conversation every morning around town, always bringing back breakfast for Vicki. Larry was well known in the Town of Fairfield. Everyone he met became his friend. He had an infectious smile and could make anyone laugh.

In lieu of flowers, the family requests that donations may be made to one of the following charitable organizations:

Share Your Memory of
Lawrence
Upload Your Memory View All Memories
Be the first to upload a memory!
Share A Memory
Plant a Tree