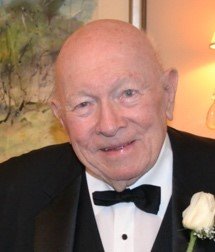 Dick was born in Orange, NJ on March 25, 1930 to the late Judge Martin J. McHugh and Jean (Connell) McHugh. He attended Seton Hall Preparatory School and graduated from Seton Hall University. In 1952 Dick married his beloved wife of 64 years Audrey (Behrle) McHugh of Orange, NJ who predeceased him.

A long time Essex County resident, Dick lived in Orange, West Orange, and Maplewood, before moving to Madison. He served in the United States Airforce during the Korean War, flying twenty-eight B-29 missions with the 345th Bomb Squadron, 98th Bomb Group while stationed in Yokota, Japan. He received a Purple Heart for his service. After the war, he served in the USAF Strategic Air Command and the Air Force Reserve, retiring as a Captain.

Dick had a successful career at ITT Corporation as a senior purchasing executive, enabling him to travel extensively. He was an avid golfer and a member of Maplewood Country Club and Essex County Country Club in West Orange, NJ. At ECCC he served two terms as president from 1993-1994 and on the Finance Committee.

Retiring from ITT early, Dick boasted he spent more of his life relaxing than working. His deep and rolling laugh could always be heard from across the room at any family gathering. He looked forward to his birthday every winter because that meant spring was close, and golfing was closer. When not on the green, he could be found tinkering in his workshop making a new piece of furniture for a loved one. He and Audrey enjoyed visiting their grandchildren, whether it was a quick spin around the corner or a weekend in Rhode Island. Dick touched countless lives, teaching many the rules of gin rummy, poker, and golf, and sharing his extensive travel stories. He was a loving father, grandfather, great-grandfather, uncle, and friend to many and will be missed greatly.

A memorial service will be announced by the family at a later date when we can all gather safely. Donations in his memory may be made to the Wounded Airman Program.     https://www.afa.org/wounded-airman-program

Share Your Memory of
Richard
Upload Your Memory View All Memories
Be the first to upload a memory!
Share A Memory
Plant a Tree