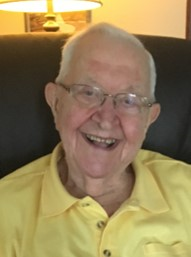 Frank G. Testa, age 93, devoted husband and father, a longtime West Caldwell resident, passed away peacefully on August 25th, 2020, at home with his family by his bedside. Frank was born May 23, 1927 in Newark, NJ, the son of the late Gennaro and the late Michelina (Cacchione) Testa. He was happily married to Olga Marcot Testa for 66 years and raised their family in West Caldwell.

He worked for ITT Avionics for 43 years starting in Production Control as a Planner/Expeditor, retiring from Logistics as a Senior Cost Account Manager.

A funeral mass will be celebrated at St. Aloysius RC Church, 219 Bloomfield Ave, Caldwell on Friday, August 28, 2020 at 11:00am. Burial will follow in Prospect Hill Cemetery, Westville Ave, Caldwell.

Services were provided by Codey & Jones Funeral Home, Caldwell. To extend a condolence or share a memory of Frank please visit codeyjonesfh.com.

Share Your Memory of
Frank
Upload Your Memory View All Memories
Be the first to upload a memory!
Share A Memory
Send Flowers
Plant a Tree