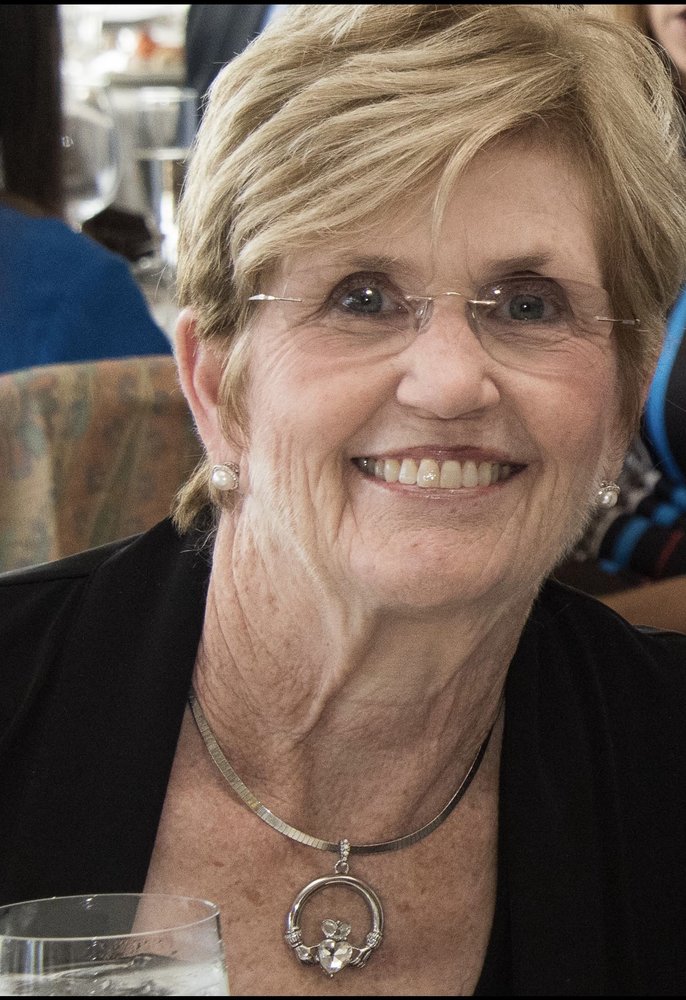 Kay White Slattery, of Caldwell, New Jersey, passed away on Saturday, November 28, 2020 at home with her loving family by her side.

When they coined the phrase “a life well lived” they must have been thinking of Kay White Slattery. From college sweetheart to wife; from mother to Nana;  from nurse at St. Barnabas Hospital to nursing instructor at Clara Maass Hospital to tutor at Bloomfield College; from helping her husband Mike start a business to helping her brother in law Bill set up his law practice and then signing on to be his paralegal and office manager – Kay truly did it all.

While her community involvement was well known, some of her good Samaritan acts were known only to a few. Her family lost track of the number of times she stopped to help someone injured in an automobile accident.  She never hesitated to stop and help someone in need whether it be an elderly man alone and confused in a smoky house, a child choking on a piece of candy at the airport, or later that same night a woman who had just a bit too much to drink 30,000 feet over the Atlantic.

Born and raised in Charlotte, North Carolina, Kay has made Caldwell, NJ her home since marrying her husband Mike 54 years ago. She graduated from the University of North Carolina at Chapel Hill in 1965 and received a School Nurse certification from Caldwell College in 1996.

She was appointed by the New Jersey Supreme Court as a lay member of the Attorney Ethics Committee and the Fee Arbitration Committee. In 1994 Kay was honored by the James Caldwell High School Athletic Hall of Fame for her many years of support of scholastic athletics.  Later that year, the West Caldwell / Caldwell Recreation Department created the Kay Slattery Award for Sportsmanship, Leadership, and Ability, awarded annually to an 8th grade girl.

Kay and Mike sponsored the Harriet Tubman School track team in Newark, NJ. Over the years legendary coach Nora Rushmore and more than one hundred inner city kids were sent to summer track camp at Bucknell University in Lewisburg, PA.

Kay has been a member and benefactor of the Irish American Cultural Institute, the Women of Irish Heritage, the Giblin Association - receiving their Community Service Award in 1997. She was honored by the Ancient Order of Hibernians, Division 9, in 2006, and was named Friend of the Shillelaghs by the Friendly Sons of the Shillelagh, Essex chapter in 2020.

Despite all her accomplishments and honors, the only thing that really mattered to Kay was her family. She was immensely proud of her children Michael, John, and Julie, and loved fawning over her grandchildren JW, Sadie, Michael, James, Caroline, and Abbie. She fought a very difficult two-year battle with cancer, saying she wanted her grandchildren to know she did everything possible to stay in their lives.

Kay is predeceased by her parents, John and Katherine White; her brother, John Checkers White; and her infant grandsons, Richard and Luke Slattery.

At the request of the family, services are private on Wednesday, December 9th at 10:00 am, but friends are invited to watch the service virtually from www.codeyjonesfh.com and/or join the family for the interment afterwards at 11:30 am in Prospect Hill Cemetery, Caldwell.  Arrangements in care of the Codey & Jones Funeral Home of Caldwell.  Please visit www.codeyjonesfh.com to extend a condolence or share a memory.

In memory of Kay White Slattery, donations made to Covenant House (covenanthousenj.org) or St. Baldrick’s Foundation (www.stbaldricks.org) would be deeply appreciated.

Live-Streaming of Kay's Service will be available on this page Wednesday, December 9, 2020 starting at 10:00 am (eastern standard time)