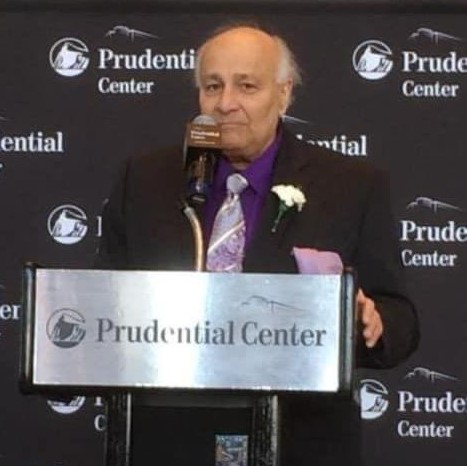 Roland Benjamin Leuzzi, of Verona, New Jersey, lovingly known as “Ben”, made the corner of Bloomfield and Lakeside Avenues in Verona the center of North Jersey’s Hockey World for five decades.  Ben passed away on Tuesday, March 2, 2021 at the age of 81. Ben loved hockey and the community and was loved by all whose lives he touched!

Born at Bloomfield Private Hospital to Roland D. and Elsie (Ambrosini) Leuzzi in 1939, Ben was baptized at The Italian Presbyterian Mission Church of East Orange under Reverend Joseph Salvaggio and grew up in North Caldwell. A late general draftsman, Ben served in the U.S. Army from 1963 to 1965 stationed at Fort Bragg, NC.  Ben settled in Verona as a resident in 1970 after marrying the love of his life, Patricia Bienert, in May of 1968 and together they raised their son, Michael, in a close-knit neighborhood of the town they loved.

After stints in the clothing business and as a stockbroker, Ben had a 48 year career as owner of Ben’s Verona Sports Center. Here are some stories family and friends would like to share; “He catered to all sports, but hockey was his first love,” says Joe Bellino, a former Verona Board of Education member who drew on Leuzzi’s knowledge of the sport to set up Verona High School’s hockey team, VGR. “He would do anything to perpetuate the game.”

Ben Leuzzi loved hockey from an early age. In 1957, as a teenager, he helped to build an ice rink on Passaic Avenue in Fairfield. Soon after, he formed the Caldwell Jets hockey team and played as its goalie. Involvement with other teams would follow, including Seton Hall Prep, where Leuzzi would be a goaltender coach and a leader of its JV hockey program. In 1972, he put his career where his heart was and opened Verona Sports Center. In addition to all its hockey inventory, it was usually the first place to put up a sign when Verona Park’s lake or the Essex Fells pond were frozen over for outdoor skating.

“If you lived in Verona and your kids were into sports, you shopped there,” says Bellino. “The community will miss the store and one of its most fundamental presences.” The store closed in January 2020, after 48 years of operation.

Joe Bellino’s son Chris says every time the family drove down Bloomfield Avenue, he would hope that the light would be red in front of the store so he could look at the hockey jerseys in the front window. He would go on to work at Verona Sports Center, where he saw the effort that Leuzzi put into it. “He was so dedicated to that store that I don’t know that he ever took a vacation,” the younger Bellino says. “Sometimes, he would go up to Verona Pool, do some laps and come right back to the store.”

And much as his parents shopped for him at Verona Sports, Chris Bellino went on to shop there for his own kids, even though he doesn’t live in Verona anymore: “I took my daughter there for soccer cleats and my son when he wanted to get his name and number on a sports jersey.” Bellino, a 1993 graduate of VHS, was to have been inducted into the New Jersey High School Ice Hockey Hall of Fame last year, an honor that has been postponed to this fall. He was nominated for that by Leuzzi, who was inducted in 2014.

And though hockey was Leuzzi’s favorite sport, he was an equal opportunity employer. Stephen Bastedo’s two sons, Paul and John, played football and baseball for VHS, and both worked at the shop. “Paul walked by the store and Ben was having a sidewalk sale,” Bastedo recalls. “He looked at my son and said, ‘if you want to help, go down to the basement and bring up inventory.”

Paul graduated VHS in 1999 and John in 2004, but both continued to put in hours at the store when they came home from college. “Ben would give them the keys to the store and say, ‘open up tomorrow’,” Stephen Bastedo says. He believes that the work ethic that his sons learned from Leuzzi has helped them in their careers as a special education school principal and a customer service executive.

Stephen Ruggiero is now the director of Essex County’s South Mountain Codey Arena, a prime venue for hockey in our area. But long before he got that job, long before he coached the VGR hockey team, he was an employee at Verona Sports Center. “Ben gave me my first job and both of my boys worked there,” Ruggiero says. And since Leuzzi was a bit old-school about his operations, that meant managing inventory in a paper ledger. “That book that he kept on his desk,” Ruggiero recalls wistfully. “We’d have to remember to erase any time we sold anything.” (Leuzzi did eventually get a computer, Bastedo notes, “but it was DOS and it wasn’t hooked up to the inventory.”)

Since Verona Sports Center closed last year, Lisa Loudon, president of the Verona Baseball & Softball League has had to come to grips with how little Leuzzi charged the youth sports organization for its gear. “We always bought our equipment from him, right to the end, and he’d pretty much give it to us wholesale,” she says. “When he closed, he donated a lot of what he had left to us.”

As he shuttered his doors, Leuzzi did have one request of Loudon. “He called me and said, ‘I want to teach kids chess, can you help’,” she recalls. Loudon called Jim Cunningham, the head of the Verona Recreation Department, to get that ball rolling, but COVID-19 brought Verona youth activities to a halt. “I’m so disappointed that I was not able to make that happen,” Loudon says.

Andor Kish, the computer science teacher at H.B. Whitehorne Middle School who also coached the VGR team, sums up the thoughts of many who knew Leuzzi. “Ben was an outstanding individual who loved Verona and gave back to the community,” he says. “He had a passion for hockey and helped Verona High School see the program get off the ground. He was dedicated to Verona and will be truly missed.”

Ben is survived by his beloved wife of 52 years, Patricia (Bienert) Leuzzi, his devoted son, Michael Leuzzi and his wife Melanie, along with three cherished grandchildren.

Join the family as they celebrate Ben’s life on Monday, March 29, 2021 at 10:00 am in the Calvary Lutheran Church, 23 South Prospect St., Verona, NJ 07044.  The church is limited to 100 occupants; however the church will stream the service. Click on this link to view the service - Calvary Lutheran

In lieu of flowers, please consider donations in Ben’s memory to the American Heart Association, the USA Hockey Foundation, or Calvary Lutheran Church in Verona, NJ.

Share Your Memory of
Roland
Upload Your Memory View All Memories
Be the first to upload a memory!
Share A Memory
Send Flowers
Plant a Tree